Each solar cell, by themselves, don’t typically produce that much electricity. So, what you need to do is wire them into a solar panel, which can then be connected into an array! 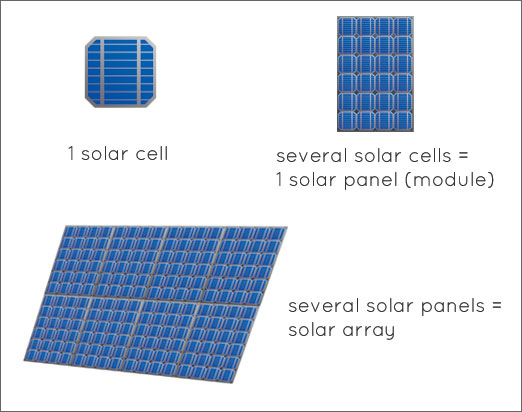 First, however, we need a little bit of electricity theory.

If solar cells are connected in a series configuration, the voltages of each solar panel add up, and the current stays the same. So, with this understanding it is a good idea to match all the solar panels for the same amount of current, because if too much current is sent through a solar cell, it has the opportunity to blow up a trace (small cracks in the metal the electricity travels on), or more damage can occur.

The following diagram illustrates similar solar cells attached in both the series and the parallel configuration, with resultant outputs below at the terminals. Pay close attention to the +/- terminals of the solar cells, the different configurations changes the way they are connected together.

It is highly suggested to connect similarly matched (same specs) solar cells. If this isn’t done, the output requires a little bit more in-depth calculations, and there can also be complications and wear on the electrical circuit (heat loss creates stress), since there will not be an even distribution of power and electron flow.