Solar Inverters – or really inverters in general – are what take the DC voltage (typically the form of electricity most energy generation devices create) and convert it into AC voltage. This is necessary because transmission lines have much less losses with AC, and also many of our electrical equipments today require AC voltage to run. AC voltage is what comes out of the wall.

Grid Tied inverters are fairly self explanatory in that they tie directly into the grid. So, you’re feeding back voltage into the grid, rather then using it. The grid is essentially ‘the power company we all love and support’, and what feeds into our houses or industrial facility that we conveniently plug our devices into.

The funny thing about an inverter is that for most of our smaller electronic devices – think smartphones, laptops, tablets, etc. – they have AC/DC voltage converters standard in the power cables you plug into the walls (think of those little black boxes that are usually half way between your laptop cable and your power outlet). To me, this is funny because if you have a large solar array and you convert the DC voltage to AC to feed back into the grid, you then have to plug your devices AC to DC inverter to use that electricity. So, we get power losses in the conversion from the solar array, and then more again in the power supply of your device. Understanding this and your own electricity requirements (ie. what type of devices you want to plug into) will greatly increase your efficiency and usability of your alternate energy system.

Solar Grid Tied Inverters are generally used for commercial projects or installations though, since they generally apply to large scale operations that don’t require batteries and instead plug directly into the power company’s grid. So in this article, we’ll discuss two different grid tied inverter types, and explain how tests are showing Micro-Inverter should be widely adopted rather then the String Inverter. 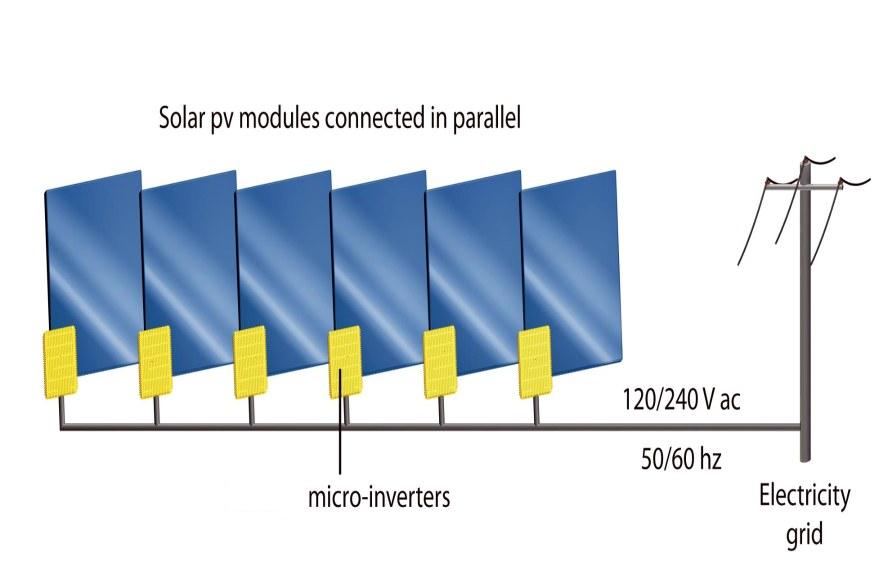 Micro-Inverters work by performing the DC/AC inversion cell by cell (or panel by panel) which essentially means that the solar panels are all in parallel (see diagram above). Having the inverters in an array like this is much more ideal because if one of the inverters, or panels, or wires happens to go down, then the entire system doesn’t also go down. One goes out, the rest still work. You’ll just get a little less power out of your solar array, but it will still provide  power.

The same logic can also be applied for some kind of solar light blockage to each of the solar cells. If the sun for some reason doesn’t hit one panel, but hits all the rest, the entire system won’t be hurt, it will only hurt that one solar panel output, but the whole system will still have a power output.

The nice thing about a micro-inverter is also it’s size. They are much smaller, lighter, and are at any given time, inverting much less voltage then a serial inverter. This makes them much less dangerous then their larger brothers, the serial inverter.

The serial inverter is a single DC/AC inverter that is the last device before connecting to the grid or your breaker box. All of the solar panel outputs feed directly into this inverter, which then does the inversion and feeds the output into the grid.

As should be immediately understandable, if the serial inverter has a problem, the entire output of your solar array will be… nothing… broken.

Users often choose the serial inverter for their installation for two reasons.

Unfortunately these benefits may be ill-conceived.

Why Micro-Inverters are Better then Serial Inverters

I’ve already kind of talked about the benefits of the micro inverter over the serial. Taking a look at the figure above, we can visually identify why having the parallel micro-inverters are more ideal and less prone to massive system failure via. the comulative failure line. If one micro-inverter fails in the system, it only causes a slight failure in the system. However, if the serial inverter fails, it’s quite a large and expensive failure for any installation and can potentially cost a lost of money both in fixing the failure and in loss of money kickback from the grid system you’re feeding electricity into.

Generally speaking, micro-inverters are fairly plug-and-play. This means that most anybody can install or replace one. In comparison, a serial inverter is a fairly large beast with high power and is probably going to be considerably larger then your circuit breaker so you’ll most likely want to have an electrician work on this and a whole room or large area dedicated to it. This means professional service costs to you installing and repairing, as well as real-estate costs. Granted, you will probably want to have an electrical engineer who knows what they’re doing if you’re installing a $100,000 solar grid array, but you will most likely not keep that engineer around for repair and maintenance of the system.

The final point is that if the solar panels are mismatched (ie. they each have different power outputs), the micro-inverter can still optimize the system for maximum output. Inherently this should have been obvious considering the first point above, but it really does open up the scale-ability of the system as it grows over time. If you have to replace an old solar panel with a newer one with a higher output, no problem. If you want to add on 10 new solar panels that your brother-in-law gave you, no problem.

In describing what the serial and micro inverters are, and identifying the differences of each of them, I hope to have got your engineering mind working at solving your own installation ideas ahead of you (or modifying your own system).