The Organic Rankine Cycle (ORC) works using a thermodynamics cycle, transforming heat into work or energy (thermo meaning heat). Today it is widely used  in biomass or geothermal applications popping up in a backyard or farm near you! According to Wikipedia, there are over 250 power plants worldwide (and counting) using this method. 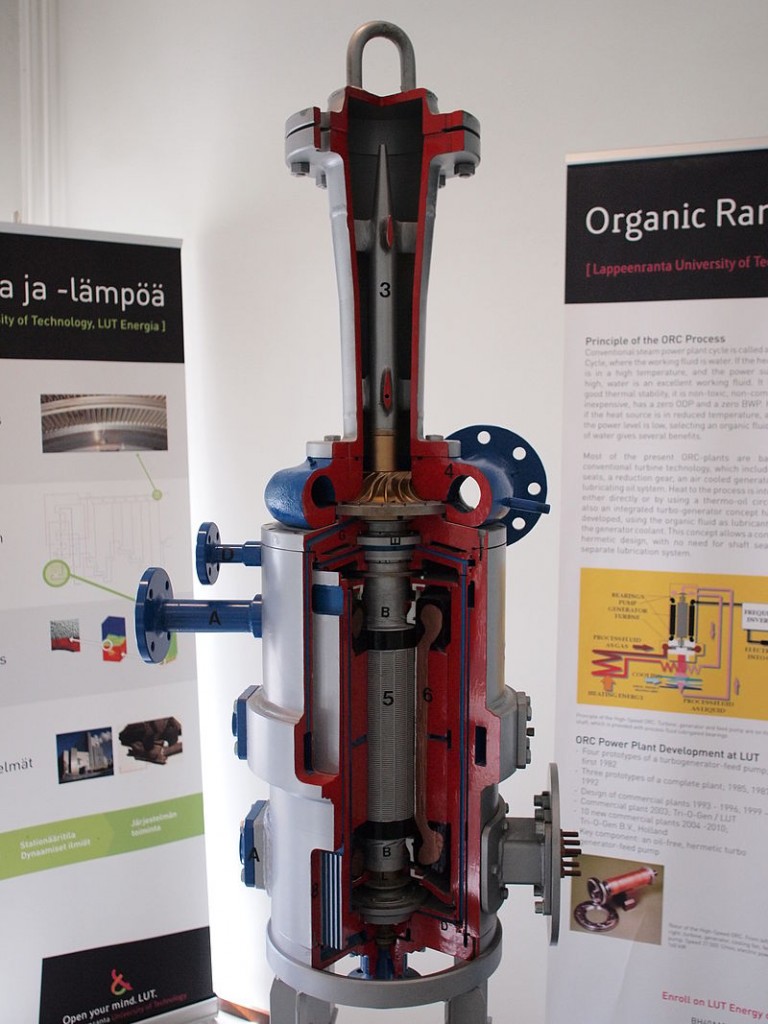 “ORC power plant” by Tommi Nummelin – 75- kW Organic Rankine Cycle power plant turbogenerator originally used at Kuopio (Finland) ORC plant during 1986 – 1990. The turbo generator is designed by Lappeenranta University of Technology. Its nominal speed is 27 000 rpm. The generator is fully hermetic; there are only flanged connections and no rotating shaft seals. Bearings are lubricated by the liquid process fluid.

The ORC is named after William John Macquorn Rankine (July 5, 1820 – December 24, 1872). Rankine was a Scottish engineer and physicist (among many other interests) who was a founding contributor to the sciences of thermodynamics. His impact was world wide, proof being his manuals and hundreds of papers and notes on sciences being used for many decades after their publications. The first prototype of an Organic Rankine Cycle generator, however, was developed and exhibited in 1961 by solar engineers Harry Zvi Tabor and Lucien Bronicki.

ORC systems work by vaporizing an organic fluid with a molecular mass higher than water and a liquid-vapor phase change (boiling point) that’s at a lower temperature then water-steam. An analogy can be made with a turbogenerator creating water steam that turns a turbine that turns the steam into rotational movement then into electrical energy though an electric generator.

Using an organic fluid with above described characteristics – as apposed to water – has a few different positive benefits. For starters it creates a slower rotation of the turbine, which leads to less wear on any moving parts of the ORC. It also works at a lower pressure which leads to less erosion too! 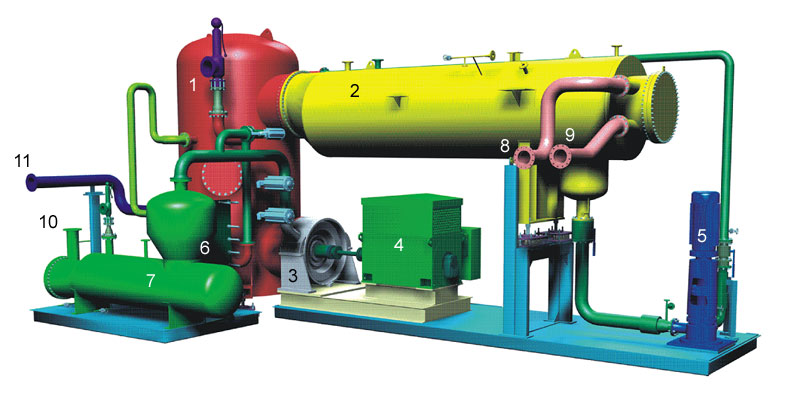 What kind of sources can the ORC use? Given the characteristics of the organic fluid given above, sources can be from biomass combustion, industrial waste heat capture, geothermal heat, solar ponds 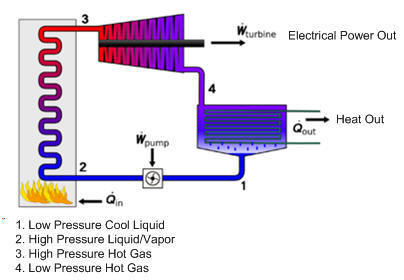 As always, one hopes to have 100% efficiency, but as one would expect working in thermodynamics, much is lost to heat. Turboden ORC claims about 20% is transformed into electrical energy and about 78% is lost due to heat (the final 2% lost in thermal isolation, radiance, and generator losses).

Another cause for loss of efficiency in the transformation of heat into energy is the path that the hot thermal oil takes in the process, through heat exchangers and into/out of pools.