x
by electricity
on May 27, 2016
under Generators, how it works, Solar, what it is
tagged axis, dual-axis, solar tracker
∞ Permalink


A solar tracker is generally an electronic controller that tracks the sun. Understanding that solar cells require sun to convert sunlight into electricity, one can immediately see the benefits of having a platform that solar panels sit on that tracks the sun. I can honestly only see two types of trackers really being effective (and not overkill): 1-axis, and 2-axis.

The idea is that there is no one optimal direction to point your solar panel. The sun moves, it is not static. This is, of course, different then static cell towers.

I haven’t stumbled upon a lot of 1-axis trackers, though I imagine they do exist. One could envision them having a second axis that’s not electronically controlled, but rather a lever to adjust the tilt, but the tracker would follow the sun during the day.

A 2-axis, or dual-axis tracker would just more effectively follow the sun.

Have a look at this page, the video at the top shows a pretty neat video example of a dual-axis tracker. 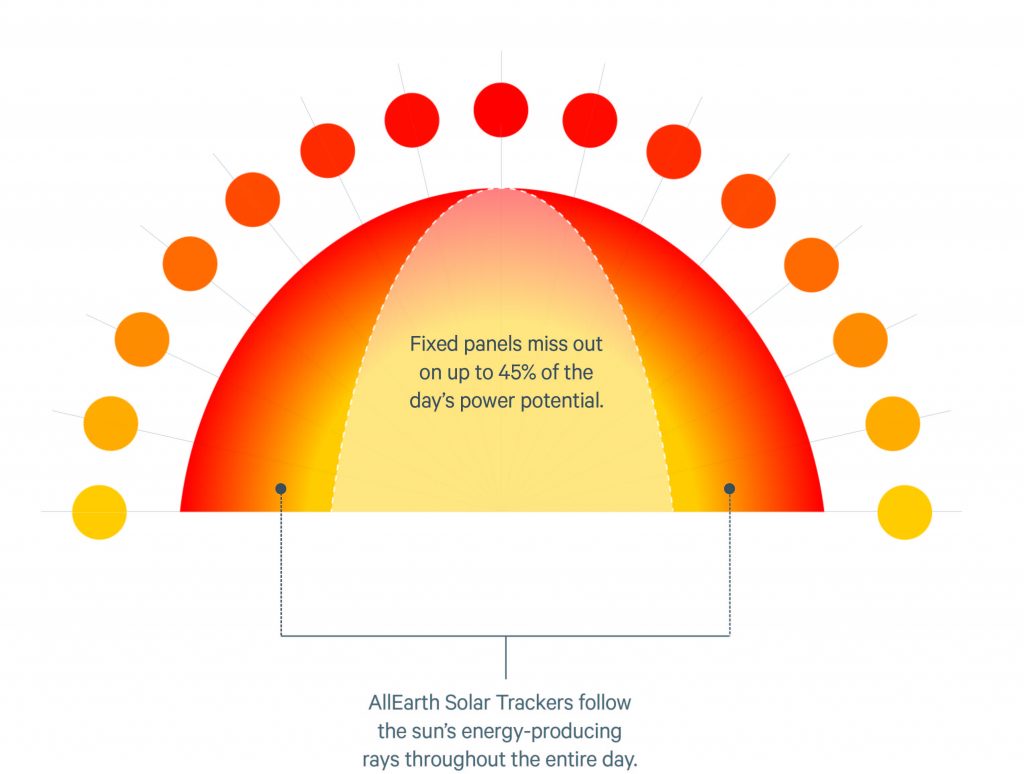 Taking a look at the image above, we can see visually the energy production of a solar panel according to the position of the sun. Note the center faded area. This is (approximately) the performance profile of a fixed panel because the sun only being converted to energy at the solar panels maximum potential at one specific time during the day.

With the benefit of having a dual-axis solar tracker (dual-axis meaning two directions of tilt – up/down, and left/right), with the rest of the diagram, we can see that that peak performance can be captured all day long – whenever there is sun.

This leads to an increase in power output from the solar panels, which means your batteries get charged quicker and you can charge more batteries. For any renewable or alternate energy installation, this is what you want.

This, coupled with placement of your installation are two very big things to keep in mind when approaching your project.

To quote AllEarth’s website (a pretty awesome maker of these dual-axis trackers):

With a dual-axis solar tracker, energy production is at optimum levels not only day by day, but throughout the seasons. Our system capitalizes on solar resources during the summer months as well as in the swing seasons and winter months when the sun shifts lower on the horizon. Thanks to this smart technology, geographic factors no longer hinder the production of solar energy. With 360 degrees of dual-axis tracking, no energy will be lost – our system follows the sun all year long no matter where you are in the world. And with GPS technology, the tracker always orients itself to capture the most from the sun.